The Chief Minister of Gujarat has taken a historic decision to increase the cultivable land of the state. To this end, he has announced the ‘Mukhyamantri Bagayati Vikas Mission’ as an important step with a plan to expand the cultivation of horticultural as well as medicinal crops with the holistic development of agriculture and horticulture sector. Bagayati Vikas Mission Yojana full detail given in this post.

Agricultural development is a challenge in the state due to arid and semi-arid as well as saline coastal areas. However, with its unique ability to turn disaster into opportunity, the government has kept Gujarat at the forefront of the country’s agricultural growth rate in terms of Krushi Mahotsav, Soil Health Card, Jal Sanchay Abhiyan, Drip Irrigation, Sat Pagala Khedut Kalyan Na, Kisan Suryodaya Yojana and Mukhyamantri Pak Sangraha Yojana.

Under this scheme, government cultivated lands in various districts of Gujarat will be allotted on long term lease of 30 years. The main objective of this Mukhyamantri Bagayati Vikas Mission is to generate more income from the cultivation of horticultural and medicinal crops by making the fallow lands fertile and to increase the export-export ratio and create new employment opportunities through valuation of such crop products. 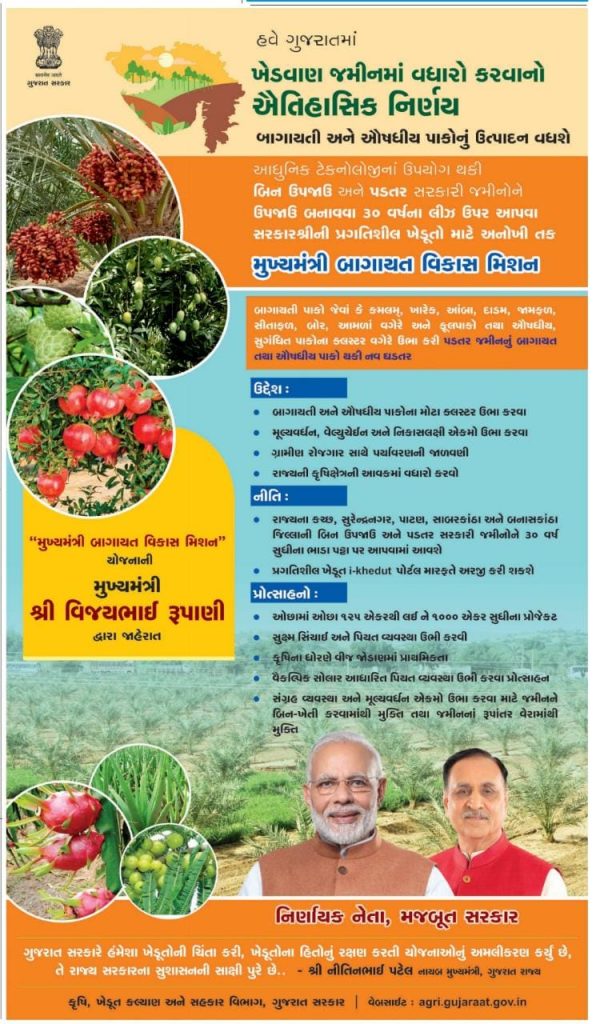 According to the Mukhyamantri Bagayati Vikas Mission, approximately 20,000 hectares of non-fertile government fallow land in the state for horticultural and medicinal crops will be allotted on a 30-year lease only for cultivation of such crops in the areas determined by the state government and survey number. As a result, proper use of non-fertile government fallow lands will be encouraged to increase the cultivation of fruits, vegetables, spices and medicinal crops.

Gujarat’s contribution to the country’s GDP will be at the forefront as new employment opportunities arise by increasing the state’s agricultural production and income.

As a result of the success of the Mukhyamantri Bagayati Vikas Mission of providing irrigation water in the districts of Kutch, Banaskantha, Patan, Sabarkantha and Surendranagar in the state of Gujarat, the non-fertile lands of these areas have also been converted into orchards with the use of modern technology.

Now the Gujarat Government has taken the initiative of this Bagayati Vikas Mission Yojana to regenerate the non-fertile barren, barren fallow government lands in these districts with the help of state-of-the-art technology through horticultural medicinal crop enrichment and double the income of farmers.

The first phase of Mukhyamantri Bagayati Vikas Mission will be implemented in five districts of the state Kutch, Surendranagar, Patan, Banaskantha and Sabarkantha.

The total crop cultivation in Gujarat is gradually increasing by about 20,000 hectares. Especially areas of North Gujarat and Kutch have emerged as hubs of crops like pomegranate, guava, kharek, papaya.

As a result of the state government’s promotion of agricultural technology, irrigation facilities and farmer friendly policies, even arid, semi-arid or saline areas have become green with agricultural production.